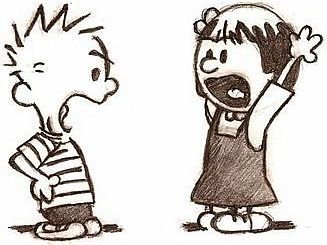 I’ve been practicing how to yell.

A friend and I have been working on an improv show that explores relationship issues. It is for sure the most serious improv I have ever attempted, and the same for my scene partner, and boy, does it feel weird. The form involves discovering a relationship problem on stage, and then uncovering and unpacking that problem through dramatic scenes. So far, it’s felt really good and cathartic, but it’s hard to know whether that’s just for us as the performers, or if the audience would enjoy the mess we make too.

There have been some bumps in this process. The form has changed a lot from practice to practice. And at some point we realized that we would have to break a major rule in improv… Typically in improv, you would try to avoid conflict — and if there is conflict, then an improviser should resist the urge to solve it, and instead allow the conflict to develop a game, or the improviser’s character. Improv is not about fixing things, it is about showing the truth in the unfixed. But in this case, my scene partner and I realized that our form requires a conflict. So whether it gets fixed or not, it needs to be there.

In most cases, though, the audience wants to see the relationship succeed, and to see the conflict resolved. While we made ourselves promise to not always have to resolve it, we did decide that the fun of a form like this would be to see the couple handling the conflict. Or, in other words, getting in a fight.

It became clear that my scene partner and I were going to have to learn how to fight with each other.

This is an incredibly tricky thing to do for me. I am not used to putting it all out there when I’m angry, and I usually try to avoid arguing. So now we find ourselves having to step outside our comfort zones to master the form.

We are still in the early stages of this problem, which is wicked interesting, because we both gravitate toward conflict resolution. We keep working our way to a solution too quickly. This is not the end goal. I mean… yes, that’s the end goal, but let’s be real: no realistic relationship manages to problem solve every little thing before dinner. That’s just not the way things work. So we’ve been pushing ourselves to stick to our guns, to find our point of view and own it, to a fault. To take sides. In essence, to do the unhealthy stuff first, and then work up to the healthy stuff.

What a bizarre feeling, to do something “wrong” in order to get it right.

It’s also really interesting to have to raise my voice at someone. I mean, it’s not like I’ve never gotten in arguments before, but even at my worst, I’m not yelling. My volume level never really reaches above what other people would consider 30%.

I have always been quiet. In high school, my english class was preparing a performance of Romeo and Juliet as a part of our curriculum, and one day the teacher took us out to the football field and told us to yell. It was supposed to get us comfortable with projecting our voice, but it did little more than terrify me. I hated the idea of being loud. I was a generally shy individual. My sister and I had gone through speech therapy in elementary school because no one could hear us, for goodness’ sake, and after a few sessions, my mother had finally relented and allowed us to stop. We just didn’t have it in us to speak up.

So being out on that football field and being asked to yell in front of my classmates was probably one of the most uncomfortable things I had been asked to do at that point in my life. I don’t think I ever was able to be as loud as my teacher wanted me to be. I just couldn’t do it. I “yelled”, and it didn’t sound natural. It wasn’t a real yell… I was just raising my voice.

So now that I have to yell in a performance, it’s a bit strange. I mean, sure, I’ve had arguments on stage before (usually when I’m not supposed to, because I suck at doing the right thing in improv — read: avoiding conflict), but it’s never been a yelling match.

It has been a very backwards experience, trying to craft this form. I only hope that it will be well worth it once it makes its way onstage. But it’s also beneficial offstage, too. Learning to yell may be a stretch for me, but maybe it can train me to speak up for myself in real life circumstances. And maybe studying the way I argue can teach me about how to pinpoint the healthier forms of dissent in relationships down the line.

It’s going to take time – both with the show, and with myself. But I’m excited to see what places the show takes me, both in improvisational goals and in self-discovery. Sounds cheesy, but if I can use a source of enjoyment to cultivate myself, then I’m all for it.