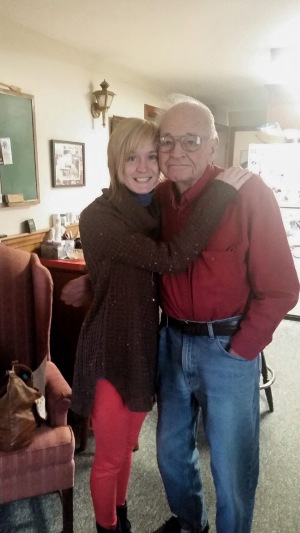 His birthday is today; his brother, my Great Uncle Donald’s birthday is tomorrow. When my sister and I were born, they placed bets on whose birthday we would share. My Grandad won — they always used to joke that that’s why he loves us so much.

Uncle Donald is actually younger than my Grandad, but he’s in a nursing home. There have been a lot of things in his life that I’m sure have aged him quicker than most — I could write a book, I tell ya. But Grandad is a stubborn man, and he carries on, periodically needing the hospital to pump the fluid out of his lungs, but still spirited enough that he doesn’t want to have to wait for it to be done.

I really miss my Grandad.

I mean, let’s be real: I miss my whole family, all the time. But there are moments when I am reminded of each family member in turn and wish that teleportation was a viable travel option so that I could pop in and see them. As my Grandad ages, his mortality becomes more and more real to me… just like Grandma’s did last year. These are thoughts that I wish I could wish away. There are moments when I get nervous about how he’s doing, or how quiet he’s gotten, and this panic rises in my chest.

It’s actually times like these that I wish I believed in the power of prayer.

Let me explain. Coming from a girl who grew up in a Christian household, that probably sounds really cynical. And maybe it is, to some extent… But I’m a different person than I used to be. The amount of faith and the specificity of what I believe fluctuates on a daily basis, but even on a good day, I still don’t seem to have that childlike reassurance that I had when I was a kid. You could say I’ve become jaded. Or you could say I’ve grown up.

I don’t believe that God is sitting around, waiting for a certain amount of people to speak up before healing someone; and I certainly don’t believe that he’s going to make someone live forever just because I ask. When I was a kid, I could pray for the sky to dance and the world to wash me in its goodness; now, I know better. My prayers are a little different.

I believe that one individual can change the course of humanity, but I believe they have to do it within the boundaries of reality. We are tiny in the span of the universe; and we all have prayers that are discordant with one another. If I pray for sun and a farmer prays for rain, the amount of our need or desire does not change the fact that the weather patterns are already set in motion. God isn’t going to screw around with nature just because someone wants to take a walk on Front Street — or because someone wants their crops to be bountiful.

I look at Bible stories differently now: when God told Abraham that he would save Sodom and Gomorrah if there were enough good people within its walls, you can believe that God isn’t really omnipotent and didn’t actually know the outcome; or, you can believe that he already knew there weren’t enough and was just trying to give Abraham a sense of hope, momentary though it was. When a child asks their parents if they can stop for ice cream on the way home, and they answer, “If there’s time,” there’s a good probability that they already know there isn’t enough time. They’re not lying — they’re answering truthfully without being the bad guy, knowing that the child is going to fall asleep in the car and not wake til they get home, anyway.

So what is the purpose of prayer? Well, I think that there is some dignity in expressing yourself — what an awful existence, if we could not state our hopes and dream — and confiding in someone does create a bond that we should not take lightly, whether it is with God or even with yourself. When I lie in bed, thinking about a scenario that has gone awry, my strength is not found in the assurance that things will be magically fixed — it is found in embracing my situation, letting those emotions run their course, and trying to remind myself that even if things may not get better, I have the opportunity to learn and grow from them. It is found in the recognition that life happens as it will, and it is better to roll with it than to dispute it, selfishly expecting different results. There is a time to weep, and a time to laugh; there is a time to mourn, and a time to dance. There is a time to be born, and a time to die. To pray for joy when your heart knows it needs to weep is to deny yourself the natural order of life.

I’m not saying that I’m against prayer. I’m just saying that I come at it a different way now. Maybe it’s a cynical approach, and maybe I’m missing out by looking through this perspective. But it’s where I am.

It still doesn’t make it better, though, when your Grandad has to go in for a procedure the day after his birthday and all you can think about is how little control you have over the situation. Realism bites.

If one individual can change the course of humanity, it is through action, not thoughts. But your thoughts tend to drive your actions. So, though I am still stuck seven hours away from my family, I will embrace the situation I find myself in: I miss them — and I let those feelings happen. They will drive me home in due time.