A Position of Power

These past few weeks have been a whirlwind, with women and men alike coming forward to name their abusers. It’s been disheartening as an onslaught of celebrity faces parade through our collective attention, but also not surprising. And I think that lack of surprise is what makes it even worse: we don’t really expect for people to be better than that anymore. We want people to be better, but sexual assault has become a part of the norm.

What I’m taking from these allegations is that people are sick of it being the norm, and want things to change. But look how long it’s taken to get to this point, how many people have been hurt and affected by people taking advantage of society’s passivity in holding those in power to a higher standard. We have dealt with numerous cases over the years; why has it taken us this long to realize something’s got to change?

And now that we’ve gotten this far, will it just be a phase? Will society really be able to make this stick? Will we forget about the allegations tomorrow, and continue on with life? Will anyone actually learn a lesson? The culture that we live in promotes a short attention span and a desire to conform, so where is the hope in all of this? So many thoughts cross my mind that make me pessimistic about the outcome of this scenario.

To me, what I think is important is that we shouldn’t be out to destroy people’s careers… they can do that on their own. This isn’t about being shitty to people who are being shitty. It’s about accountability. We should be saying, “You did awful things. Now, what are you going to do about it?”

And I think that’s the question that we often forget to ask. We are fully behind the notion of burning an effigy; but as we’ve learned with the removal of Confederate statues this past year, eliminating the icon doesn’t magically change those who worshipped it. It’s a start, but it’s just fixing the symptom.

I have a hard time labeling someone as a shitty person because I know we can all have shitty moments. But for those who continue that behavior again and again, it then becomes hard not to label them as so. In recent years, I’ve tried my hardest to reflect and remind myself that the way a person has acted up until now in their life is not the set path that they must continue down for the rest of it. There can be turning points that dramatically change someone’s outlook and allow them to reevaluate their life and act accordingly.

This time is a turning point. Or it can be. So far, we have allowed society to teach us that these actions are okay. The amount of people who have actively shown resistance to such despicable acts has been small, and easy to look over. That is now changing. And I hope that it significantly impacts the way that people see the world, and the way that they learn and their understanding of what is acceptable and what is shitty. 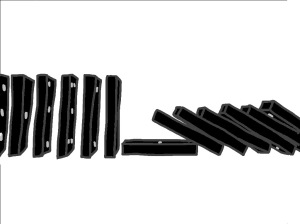 Let’s tear down the standard, not only in Hollywood but in all society; but let’s also rebuild it, so that in the years to come, consent is not even something that people have to remind themselves to get. So that people in positions of power will be able to understand the responsibility they have, and act with decency and respect. So that in another fifty years, there will be significantly less people who can be called out, because we learned our lesson this time around.

So yes. Let’s call people out for their actions. But remember to give them an opportunity. Not to make things better, because it’s not about giving them the opportunity to become heroes… But the opportunity to change. Let’s remind people that because they had a responsibility to uphold decency and failed, they must now fulfill that responsibility. Let them earn back their respect with any respect they give out from this point forward. And if they don’t do that, then they get nothing from us. If they can’t find change in their hearts, then we don’t want them in a position of power.