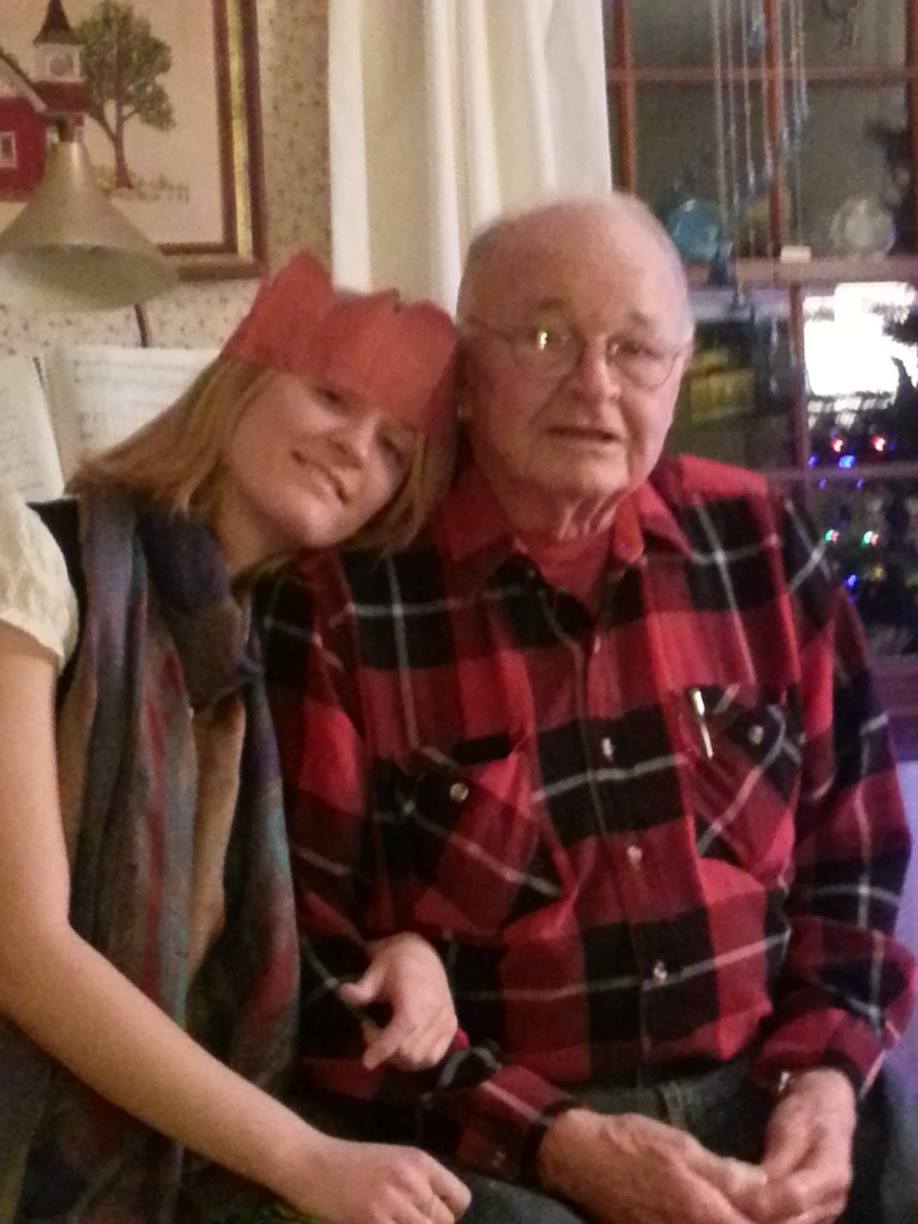 He was a fireman, and a diver for the police. And he built houses. He kept building until well after retirement.

His workshop in the garage was the reason that I still love the smell of wood shavings and gasoline. My sister and I used to sweep the wood shavings back and forth, from one end of the garage to the other — that was our version of playing “house”.

He once made a fox out of plywood, with hinged legs, so I could have a pet fox.

He used to drive a big white van, which was always full of tools. I liked riding in the van, because he had an old man doll that looked like him, and a little fuzzy pom-pom ball creature on the dashboard.

He loved watching westerns on TV. His favorite movie was SHANE. He also adored FINDING NEMO.

He taught me about the air holes that you find in the wet ocean sand, how they belong to clams and hermit crabs and other small animals.

He was a hunter, but he loved just watching animals, too. He would feed the birds with leftover food in the backyard. He loved birds, especially the wild turkeys. He had a turkey call, and he would light up every time a family of wild turkeys would gather in the backyard.

We used to pick blueberries in the woods next to his house. Just this past year, they tore down the woods to build a new house, and he sat for hours outside, watching them build. It was a fair trade — we lost the blueberries, but he got to watch a process that he was too frail to actually be a part of anymore.

But he wasn’t always frail. He didn’t know his own strength. He had a knack for giving you a playful push, and throwing you off balance in the process. He liked to tell you he would “give you a knuckle sandwich”. He had big, knobby fingers, which he liked to give turtle bite pinches with.

He once made his fingers look like a butt in the reflection of his spoon.

Once, as we drove to New Hampshire to go to the camp, he sat in the back seat with me and helped me color a Land Before Time coloring book. And he didn’t even get mad when I started crying because the big, long-necked dinosaur was getting left behind.

We used to ride four-wheelers around the camp, and our favorite time was when we could ride with him.

He used to call me, even though he didn’t really know how to use his cell phone, just to say hello. My sister and I would compete with each other — we would end our calls with “I love you,” and if he said it back, we would win. Though usually he would just say, “Yeah,” or “You too.” He was a tough nut to crack.

He read my manuscript, even though he didn’t read so well, and when he was done, he called me and told me what he thought of it. And though I knew he didn’t quite understand it, he understood that it was important to me.

He loved his beer, but he loved his liquor more. Once, I was told that Grandad had quit drinking — doctor’s orders. The next time I came to visit, he was having himself a nice scotch.

I wish that I had talked to him more. I was never good at talking with Grandad, because he wasn’t very good at talking either. But I loved sitting with him. I loved looking at old photo slides with him, or messing with the rock polisher he had in the basement.

And then Grandma died, and I saw Grandad cry for the first time. He cried, and he said “I love you” freely, and then he started to become old. He would be easily winded, even from talking, and he kept falling. And he started to have signs of dementia. Every time I visited, he was a little worse off.

One time he took his glasses apart, and he couldn’t put them back together. The screws were missing. He wanted to go to the eye doctor to get the glasses fixed, and was furious when Mom wouldn’t drive him. So I went to CVS, bought a glasses repair kit, and fixed his glasses. I handed them back to him, and he said, “Oh! You’re good shit.”

After that, basically, it was tough to get him to talk at all. First it was his lungs; they were too filled with liquid, so saying even a few words wore him out. He got the liquid drained from his lungs, but then he fell.  He ended up in the hospital with a broken collarbone, and from there, the rehab center, and he was frustrated because he couldn’t keep his head lifted upright.

I remember being so mad at myself for getting him a squirrel feeder for Christmas, when everyone else got him sweaters and blankets… things that he really needed, because he was always so cold, even when the temperature was up too high. I thought he would get a kick out of the feeder; in truth, he probably never got the chance to use it.

I never really got to give my Grandad a proper goodbye. They will tell you he loved you, and it means something, but it’s not quite the same as hearing it from his own mouth. I’ll have to make do with the times that he did say it — even if it was on the phone, or while he was in tears. He didn’t need to say it; he showed his love by being there. He was Bill Boyne, damn it. He was my Grandad. And that’s all that really mattered, in the end. 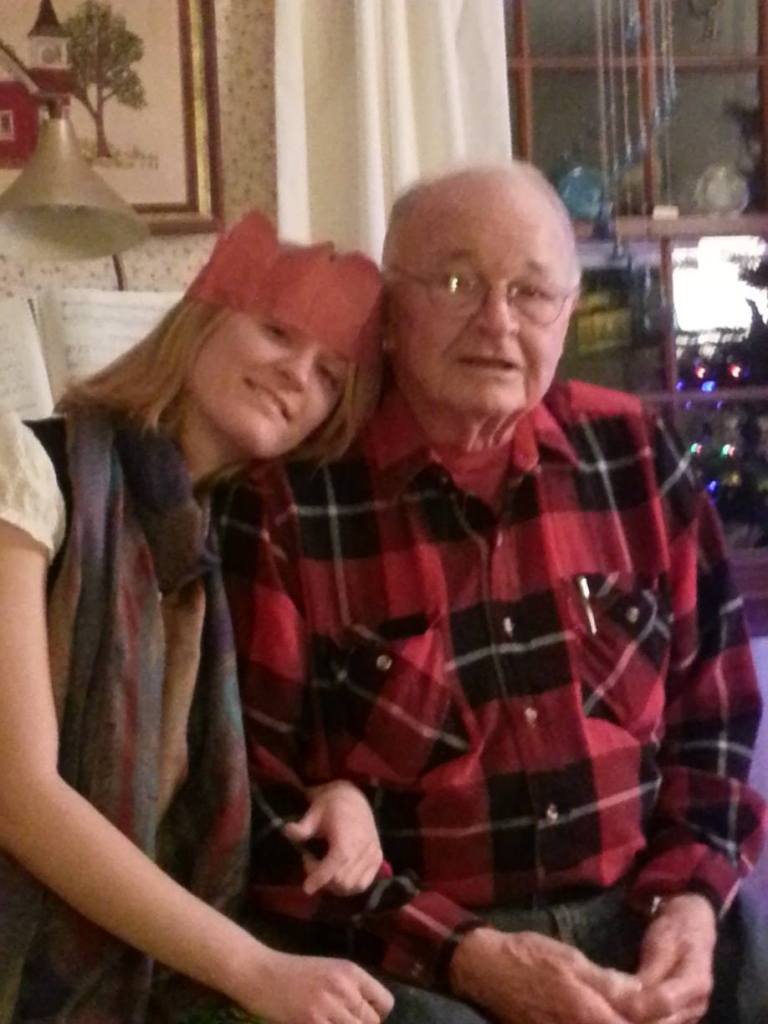