I know I’ve been fairly silent since I crossed the Atlantic Ocean, but don’t worry: I am safe and sound with mi hermana. I had to wait in Budapest for a day and a half to be reunited with her, but reunited we were, and then we crossed into Romanian territory.

Becky and I set off my first full day in Romania with a bang. How, you ask? We spent it with deaf Romanians. Talk about a communication barrier, right? Except it actually wasn’t – or at least as much as you would think. Granted, I did have the advantage of two hearing people with me – my sister, and Natalia, who both speak limited Romanian and Romaninan sign – but for the most part, it was just a joyful mess of trying to figure out what people were saying. I say “joyful”, but maybe that was a bit one-sided… I had fun, anyway.

The morning started at the bus stop, where Becky and I met Natalia, Becky’s Russian coworker. We then got on the bus, which was entirely inhabited at this point by Deaf passengers going to the same service we were going to (one of whom looked like Christopher Eccleston! Sorry, no pictures).

When we got to the church, Becky picked a spot far enough away from the speakers so that we wouldn’t get blasted with sound during the music portions. Yes, music is still incorporated into a deaf service… they can feel the vibrations of the bass, to keep the beat. They did songs in two ways: one, in which someone would lead the congregation in signing the words that appeared on the screen; and two, in which the pastor turned to the congregation and asked if anyone would like to lead them in a song. Someone volunteered, and this heavy beat would start playing and then the individual would essentially (or at least from what I could tell) freestyle it, signing a Psalm or some other Bible verse. This was my favorite, because it was like musical improvisation.

Following the sermon was very difficult for me. Natalia was to be my interpreter, the poor girl. Imagine wanting to sit down and get something out of a message and then have to interpret for some idiot. She inadvertently made Becky and me laugh before the sermon began, because she had put in earplugs to fend off the loud speakers, and started speaking to us – in Russian. She quickly realized her mistake, and interpreted the sermon as best she could (she was able to speak out loud as the speaker signed), but I already have a hard enough time focusing on things while I’m sitting for a long period of time. Becky was merciful and blamed it on jetlag, but you can be let in on my little secret: I haven’t been able to listen to a sermon, or even a lecture, for years without falling asleep at some point during  the message. I need to be doing something active.

After the service, everyone sat around and drank coffee (which apparently not all Romanian Christians do… I guess some of the churches won’t drink coffee because it’s bordering on “coffee and cigarettes” imagery). This was the obligatory introduction period, in which every single person commented on how much Becky and I looked alike, and how beautiful we were. After meeting about thirty people, I now have that awkward “haha, thanks” expression permanently ingrained onto my face.

But it was also an exciting time for me, as I tried to communicate with people via Becky, and worked on picking up some Romanian signs. A lot of it was just staring at people as they talked, then nudging Becky and saying, “What does this mean?” and doing a clumsy attempt at a sign, and hearing the reply, “Um, I’m not sure.”

Some of the people were good to me, and mixed in some miming with their signs as they talked to Becky and me — something that Becky later told me is great for communication, but not so great for learning. Deaf people are apparently much better at communicating across languages, because they have so much practice dealing with incompetent people such as myself, so they get used to the idea of having to communicate in whatever way possible.

After coffee, a group of us decided to go out to lunch, during which I did some more staring, but also got to know Becky’s friends a little more. Imagine having to communicate with someone who knows absolutely none of your own language, and think of how frustrated you would get; now erase that attitude from the equation, and you have the reaction that these people had to communicating with me. Now, true, a lot of the time they simply involved themselves in other conversations, as unsure as I was about what to talk to me about, but when we were engaged, they engaged. They didn’t just walk away.

The day ended with a walk around the city center, which is beautiful and under construction, which somehow makes it more beautiful. A metaphor for life, perhaps? Or at least the perfect ending to my first full day in Romania. 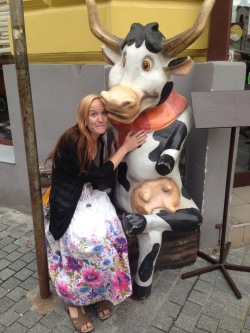 One Reply to “Deafinitely Beautiful”