Quite Contrary (Fending for Weeds’ Honor)

Ah, summer. The season in which gardeners turn trowels into paintbrushes and claim nature as their canvas. Granted, if you’re a good gardener, you will have started your garden months before now, when spring first defrosted the soil; but as it is, I am a bad gardener. Though I did plant my seeds a few weeks ago, I have little hope that they’ll reach their full potential due to their late start. Hey, at least they’ve started growing.

But gardening does give me something to think about and look forward to. Every day I water my little patch of soil and hope that I won’t kill the plantlife I have willed to life. The problem is, I can’t tell my photoautotrophic babies from weeds. I am a terrible mother.

So I decided to sit myself down and do some Garden Googling. I looked up the types of weeds in Pennsylvania, and how to recognize them, and discovered that yes, only three of the seven types of plants that I planted are actually growing —  the rest are weeds. I had had my suspicions before my research, but this confirmed it.

But my Garden Googling didn’t stop at weed identification. Oh, I was still researching weeds, but boredom will often gravitate you toward things you are more passionate about, and for me, that thing is the power of words. I love nitpicking the English language, for better or for worse. I looked up several definitions of the word “weeds”, and, contrary to what is supposed to happen when you learn about weeds, by the time I was through, I decided that I kind of relate to the little suckers.

Dictionary.com tells me that a weed is a “valueless plant growing wild, especially one that grows on cultivated ground to the exclusion or injury of the desired crop”. Not gonna lie, my mind immediately replaced “plant” with “person” upon reading this definition (because what good is life if it can’t be wrought with metaphors?). If we’re going by this definition, I’m willing to bet many people could call themselves a weed. There are thousands of books and films that just eat up the idea of a “wildchild” living in high society, raising hell and ruffling the feathers of the elite. These “weeds” are usually the hero of the story, though often the “injury” that the desired crop receives is translated into a blessing in disguise — some hoity-toity rosebud will be influenced by the wildflower and sow a little seed themselves (so to speak).

But some may feel more inclined to relate with this snippet of The Free Dictionary’s definition: “A plant considered undesirable, unattractive, or troublesome, especially one that grows where it is not wanted”. Well, apart from basically nailing the emotions that everyone felt in middle school, it also describes a handful of adults in every social circle. You know who I’m talking about: the person who makes you feel like you’re meeting Milton from Office Space, but not the version that you can laugh at on screen — the real version, the one that causes you discomfort every time you interact. Maybe that’s a little extreme; but there are plenty of people out there that get brushed under the carpet. And chances are you’ve found yourself in that state of mind at some point in your life before. I feel that way all the time, questioning just how “wanted” I am in a social situation.

Thirdly, there are people who more accurately fit Merriam-Webster’s description, which describes a weed as “one that tends to overgrow or choke out more desirable plants”. These are the hostile little bastards that make only three out of seven of your intended plants grow (I’m saying this, of course, as a completely neutral party). Everyone knows someone like this, whether it’s in the workplace or through mutual friends, or even in your family.

The point is, there are just as many variations of weeds as there are people.

I know that I’m supposed to write about how we need to “remove the weeds from our lives”, but weeds are so much more artistically versatile than you’d think. Here’s where my internet research started to get more fun… because after dictionary definitions, I just had to look up authors’ quotes about weeds. Their views on these troublesome, undesirable plants tend to be much more poetic and empowering: 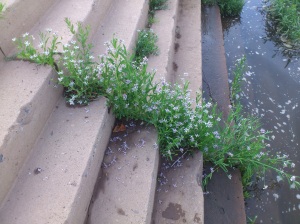 “What is a weed? A plant whose virtues have not yet been discovered.”
– Ralph Waldo Emerson

A weed is but an unloved flower.”
– Ella Wheeler Wilcox

And one of my personal favorites:

“When weeds go to heaven, I suppose they will be flowers.”
– L.M. Montgomery

Which just goes to show that even the weeds amongst us have hopes and dreams, feelings and virtues and a longing for love.

And they can be pretty.

Perhaps not always in the traditional sense — sometimes weeds are just a bunch of snaggly leaves — but some of them have flowers. And some have (or can be given) a purpose: poison ivy can prevent erosion, and purslane makes a nice, sour snack. Sometimes it is not the nature of the plant that makes it a weed, but the nature of the person beholding it.

The thing is, it’s a shame that we call some of these guys weeds, just because we didn’t intend for them to be in our garden. Sometimes it is the most unexpected relationship that blooms into the most beautiful friendship; and yet oftentimes we make a snap judgment and pull these people out of our lives by the roots because they’re frankly not the most attractive addition we were hoping for. I find myself doing this more often than I’d like to admit.

I will leave you to ruminate on the weeds in your own garden; but to finish with a flourish, here is a quote from Les Misérables:

“With the exercise of a little care, the nettle could be made useful; it is neglected and it becomes hurtful. It is exterminated. How many men resemble the nettle!” He added with a pause: “Remember this, my friends: there are no such things as bad plants or bad men. There are only bad cultivators.”
― Victor Hugo