Hello, all you wonderful people who are bored enough to read this blog. It has now been two weeks since my last post, something that I wish I could say just occurred to me but in reality, I have thought about every day for the past week. I just couldn’t think of anything to write.

I have had this problem in the past, but usually I’ve forced myself to overcome it and just pick a damn subject to ramble on about. So I can’t really excuse myself in this situation. In fact, I think it really boils down to laziness. BUT, as an apology for being lazy, I decided to go through a bunch of old journals that I wrote as a kid and show you how freakin’ hilarious I was as a child. You’re welcome.

I have boxes full of old notebooks that I filled as a kid, many with stories and characters. But for now, I’ll just show you journal entries — you don’t need to be bored by the fictional adventures created by a girl who hadn’t quite mastered plot structure.

But I’ve got lots of fun things to show you. For example, the phase where I ended every journal entry with “Bye!”

Or the journal entry in which I quite literally wrote everything that was happening (I swear, I wrote just for the sake of writing):

In which I was extremely polite and humble in my school journals: 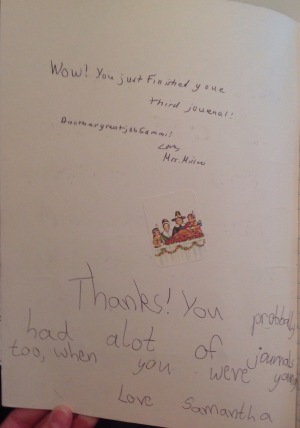 In which I treated life events with casual demeanor: 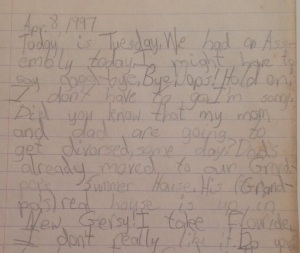 In which I was a stubborn, true-to-myself individual who would not bend to my teacher’s will: 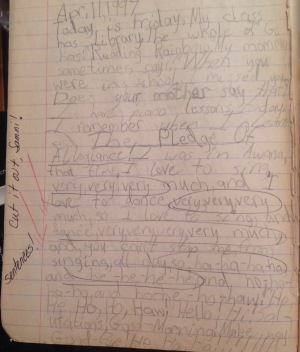 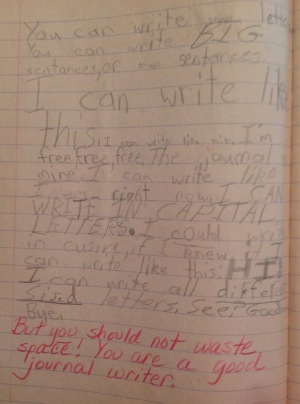 In which I spoke to my journal like it was a person: 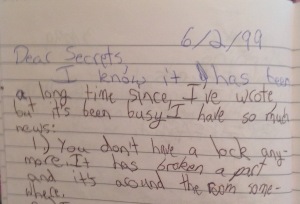 In which I was a little too enthusiastic:

In which I made Becky write a television show with me:

I’d like to think that my writing style has improved over the years. But it is still a lot of fun to go through old journals and connect with Younger Me, that zany, unbridled personality that has now grown up. Hopefully I haven’t grown up too much.

Anyway. Enjoy! Next week I’ll be back with a more thought-out post. Promise.