Cats Worry, and Other Stories We Tell Ourselves

Early this morning, I had the thought that my cat doesn’t trust me, and it made me feel better.

I was crying, and normally when I cry, my cat ignores it. He doesn’t understand what crying means, that it means I’m upset, so he just continues on, acting like a cat. Usually being pretty damn annoying, as one tends to be at 3am. Well, he was in this particular instance. While I cried, he tried to climb the window, and finally I sobbed out at him to stop, and amazingly, he obliged and came up on the bed to cuddle. 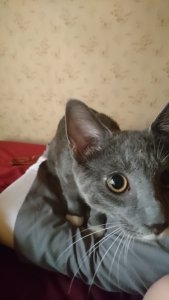 He lay on my stomach, held my hand between his paws, and stared at me. Stared at me as I cried, thinking about whether people would be put out if I was gone, and whether it would affect anyone past being sad for a little bit. Like, I was really trying to be logical about it. Work would need to get a few things sorted, but once they did that, they’d be fine, and the only people I figured whose hearts would really break really wouldn’t have too much of a difference in their physical day-to-day, because they’re family and live far away, that sort of thing. The crying was more a separate thing that was happening alongside all the logic that was going on. And my cat, through all of this, stared at me as the tears subsided, as I lost the strength to keep crying, and I kept looking down at him and seeing his little kitten eyes, staring at me, and I thought to myself, a sign that your cat trusts you is if he closes his eyes around you. But he was ever vigilant, watching me, not daring to shut his eyes.

And I thought to myself, if I didn’t have any logic, and anthropomorphized this creature, I would believe that he is worried about me. That somehow he has figured out that I need to be watched, and that is why his eyes are open right now. But he’s a cat. I do have logic, and I know that’s not true.

But maybe that’s my problem. Maybe the key to survival is to stop being so logical. Maybe I need that anthropomorphism to keep me alive, to believe that someone is worried about me, that this little guy wants me around.

I guess in terms of physical survival, logic is important, but in terms of emotional survival, I think we’re better off without it. I think the more we try to be honest with ourselves about our place in the world, the more we’ll come to realize that no one is really needed, or important on more than a superficial level, and I think I’d rather cling to some semblance of worth reflected in the people around me. Even if it doesn’t make sense, I’d rather believe that that worth is there. Applying logic has only brought me to low places, so I would like to be illogical, and be content with a world that I create. Maybe that is how people find happiness.

I have always sworn by story as a way of navigating through life. Religions have done it for centuries; and as individuals, we do it all the time. Whether it’s to make sense of a situation, or to displace logic, story is what’s gotten us through it all, time and time again. We ascribe purpose to our lives through the stories we tell. And I’m very grateful that I’m a good storyteller.