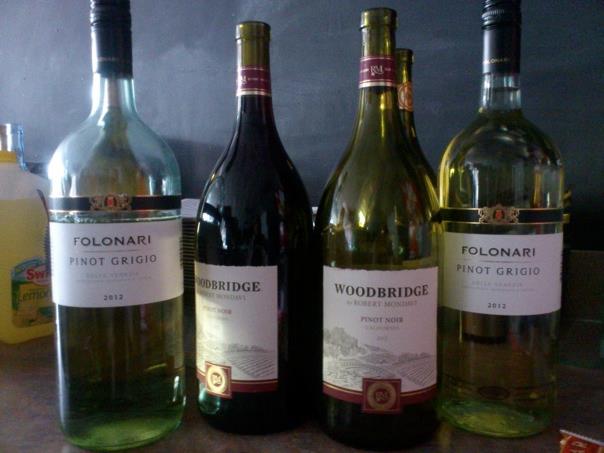 My Grandad was a big drinker.

His favorite place to take the family was the Yarmouth House, a nice restaurant where everyone knew Bill Boyne for the legend that he was. He would usually order scotch, and sometimes, he would offer a sip to the grandkids.

Sipping your grandfather’s drink was a nice little ceremony — a little reminder that he liked you. And we liked him a whole lot — that’s why we would always fight over who sat next to him. Not because of the sips of alcohol, but because it was a seat of honor.

But with each drink he had, the more insistent he’d be… Not always with his alcohol, but with an appetizer he’d gotten, or a bite of his own meal that he wanted to share with us. He would prod us, each prod a little more forceful depending, again, on the amount of alcohol he’d had, and say, “Eat! Have some!”

Which got a little annoying after a while. Grandad didn’t realize his own strength, sometimes, and he wouldn’t notice us rubbing our arms after his prods, or pay attention to the fact that we said we were full, for that matter. He was having a good time, damn it, and everyone in his vicinity would, too.

Grandad was a drinker. It was part of his personality. Even after the doctor tried to cut him off for his health, I’d catch him with a drink in his hand. And though I bought my first bottle of scotch in his honor after he died, Grandad is also a reminder of how you can become the drink in your hand.

I’m not saying he wasn’t the same person when he wasn’t drinking. He was still stubborn, still feisty, still someone you had to peel back the gruff layers to see fully. He still loved his family like there was nothing else to love. But Grandad was a drinker. That was a part of his description as a human being. You could spend about ten seconds describing the man, and that would come up.

My relationship with alcohol has definitely undergone an evolution over the years. I went from not liking it at all (when I was underage, drinking just seemed like a thing people did to break rules and feel rebellious, which didn’t sit well with me), to dabbling with mixed drinks and cider, then onto beer, then onto wine, and then learning to nurse spirits like my grandfather did.

My experiences have been pretty tame. I don’t have any crazy blackout stories (I have blacked out once, but I would hardly call it a story). It now takes me a total of two beers to get completely drunk, so I can’t make any boasts in the tolerance department. I wouldn’t consider myself an alcoholic, not by a long shot, but alcohol has still certainly affected my life in plenty of instances.

I remember the first time I drank more than a couple of sips was in college — really the only time I drank before I was 21. I was at a party, and there was jungle juice… which, honestly, meant it could have been any assortment of things. It was disgusting, but I figured, it’ll be an experience to know what it feels like to get buzzed. And I did get buzzed. I also had to help my drunk roommate walk up three flights of stairs, and hide her medication from her for fear that it wouldn’t mix well with alcohol. So I didn’t drink for a while after that.

The next party I remember going to, I started talking to a boy. He seemed pretty excited at the fact that we were hitting it off, until I drunkenly told him he wasn’t getting in my pants, because I wasn’t that kind of girl. Poor guy. I have no evidence that that’s even what he was trying, but the more I drank, the more paranoid I got about the situation I was putting myself in, and I wanted to be damn clear.

I didn’t always have the best judgment, as most experience with alcohol. When I briefly moved to Los Angeles, within the first couple of weeks my roommates and I played beer pong with the guys across the hall, and I made out with a guy who was clearly an asshole (first sign: he said he didn’t like sand. Like, sand at the beach. I should’ve known). The day after, I pretty quickly made the realization that I didn’t like the guy (and a couple of weeks later found out he had a girlfriend, so trust your instincts, folks), but in the moment, while drinking not even remotely enough alcohol to be drunk, a loneliness had washed over me – that tide of fear you get when living in a new city, even when you have an apartment full of friends to support you. That loneliness will creep up on you.

I’d love to say that was the last time I allowed alcohol to influence my decisions, but it definitely wasn’t. Since then, I’ve had my fair share of screw-ups, and I’ve also gone through a couple of alcohol-free periods, just because.

In the past couple of years, I’ve definitely questioned my alcohol intake more. Especially now that I feel it in reference to my health… Not only are the mornings after significantly worse than they used to be, but my body very clearly hates when I drink more than a couple days in a row, and will blatantly let me know that in various ways.

Don’t get me wrong, drinking is an enjoyable thing. But it has its consequences.

I think the biggest consequence it has is that it makes you passive. I mean, obviously not in the sense of what you do when drunk, because plenty of people become very active and do crazy things when under the influence… What I mean is, it’s so easy to put the blame for your actions on your drink. “I normally wouldn’t do this, but, well, I’ve been drinking.” Or, “I’m sorry about last night. I was drinking.” It becomes so easy to pull focus from your decisions when you have a drink in your hand.

It’s also a great scapegoat for emotions. “I just feel this way because I’m drunk,” or even, “I need another drink, so I can get out of my head.” So often people let alcohol take the reins for things that are pretty achievable while sober; but we recognize that alcohol makes it easier. And so we submit.

I’m not trying to bash drinking. I love it. But I’ve just been thinking about it lately… every time I have a drink with friends, the next morning I’ll sit there, kicking myself for things I did or said. In a way, I’d love to chalk it up to the alcohol doing its damage, but somehow I understand that I can’t use that as an excuse anymore. All those stupid things I’ve done while drinking were my decisions, not the alcohol’s. I can’t act like alcohol turns me into some other person, when really it’s just loosening my inhibitions to draw out who I am, deep down. This is me.

Maybe that’s what people like so much about alcohol — that they do believe the alcohol is transforming them, and it allows them to put up a barrier between their sense of who they are and who they are when drunk. I think all of us would rather just blame it on the alcohol, but I’m holding onto this idea of claiming what goes on in my head. I want to deal with the fact that that’s me, not just what the alcohol makes me. I want to be able to see who I am, and be comfortable with that, sober, before I worry about being under the influence.

One Reply to “Under the Influence”