I don’t know if you’ve seen this going around, but there’s a new set of images on the Internet showing Disney princesses without makeup.

A sort of bizarre realization struck me as I looked at the article. I started to think about the reactions that people might have for these pictures, and what some of the comments might be — ranging anywhere from “She’s still pretty”, to “She looks drunk” or “What happened to her eyebrows?!” In one fell swoop, an article that aims to make a point about the standards of beauty in today’s popular iconography has instead got people critiquing the characters’ appearance. No one sees these pictures and thinks, “Man, Mulan was such a badass”; instead, they think, “She looks tired”. Instead of looking at Belle and remembering her passionate personality, people will look at her and think, “See, she doesn’t look that bad without mascara!”

If it hasn’t become clear already, I have had the firm opinion for a while now that we’ve allowed women’s lives to become too inextricably reliant on makeup.

A pretty simple statement, made more complicated when people try to back up this statement with “You’ll look beautiful without your makeup!” or “You’re just hiding your inner beauty”. To be honest, it’s not even about that. In fact, to be brutally honest, yes, there are ugly people in the world. I mean, I know beauty is subjective, but there are certain characteristics that have become widely acceptable — so depending on the definition of a particular culture’s standards, some people are considered ugly. It’s not their fault, it’s just the luck of the draw. And many counteract this by wearing makeup.

The problem is, when do you reach the point in your life that you decide you’re one of those people? When do you sit yourself down and say, “Hey, I’m ugly. I need to do something about this”? Last year, a study in the UK showed that the average girl starts wearing makeup at 11 years old. I just want to quickly point out that a) a girl’s appearance will change after the age of 11, but if she’s trained to think she’s ugly that early, she will still believe in the years to come that she needs that extra push to make her beautiful; and b) it’s also a bit disturbing that at such a young age, girls are already jumping on board with the idea that they have to look good to belong. Because that’s what society tells them.

I know that’s not what you meant — at least, not advertently. But note that there are plenty of ugly men in the world, and they don’t need to wear makeup to be socially acceptable. You get one ugly woman who decides to go makeup-free, and everyone rolls their eyes like she should know better. If a woman isn’t attractive, she isn’t wanted.

This is what I mean when I say that women have become too reliant on makeup — their makeup becomes their lifeline, their “in” with society. Women must cover themselves with product to measure up to the standards that we’ve given them. 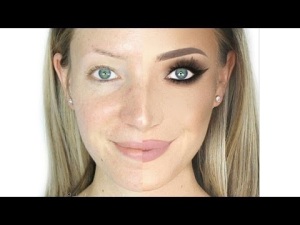 And why? So there are ugly women. So what? Your self worth should not not based on how attractive other people think you are. Why have we let this stigma last for so long? I think the real problem is not that an unattractive woman decides to go out in public without makeup, but that the world around her has such a nasty reaction to her doing so. A woman does not have an obligation to look good for the people she passes in the street; she does not have to be model material to win someone’s heart; and yet, those are two widely held beliefs. Until we reach a point as a society where first impressions are not about how pretty a woman is but how confident she is, how kind she is, how devoted to her work or how inclusive she is of the people around her — until then, wearing makeup will still be considered a necessity.

Ladies, I’m not saying that you shouldn’t wear makeup. In fact, every once in a while I’ll wear makeup, because it’s fun to dress up. Some women have a lot of fun trying out different styles; it becomes an art project. Just like the dye jobs that I do with my hair — it’s fun to do, and it’s a way of expressing yourself. And if that’s your outlook, then go right ahead and show your true colors.

Makeup can really allow you to express yourself. Just don’t allow it to cover you up.